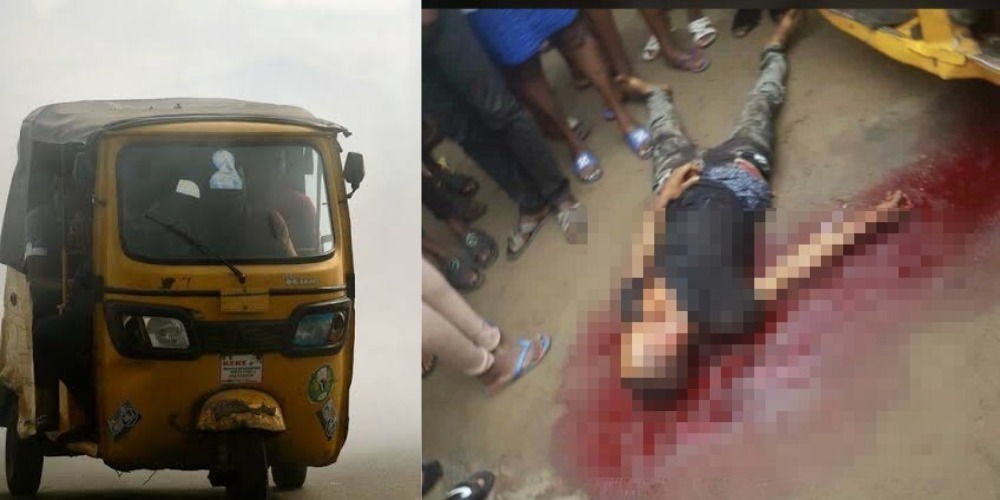 A police officer has allegedly shot and killed a Keke driver this morning over N100 bribe at Rukpoku, Port Harcourt.

A police officer has been accused of killing a young keke driver identfied as ‘Schoolboy’ over N100 bribe at Rukpokwu Town in Port Harcourt, Rivers State.

It was gathered that the police man shot dead the young keke driver this Thursday morning because he refused to give them N100 bribe.

The officers was said to have fled the scene immediately after killing the young man, forcing other keke drivers in the area to block the road in protest against the killing of ‘Schoolboy’.

This incident is coming amidst call by some Nigerians for a second wave of the #EndSARS protests against police brutality and human right abuse by law enforcement officers.

Meanwhile, many Nigerian have taken to their social media accounts to condemn the killing of the keke driver and also call for the arrest of the officer involved.

The killing at Rukpokwu was not a stray bullet. It was a direct shot in the head of a Keke rider that refused to part with N100. #EndSARS was barely 7wks ago & here we are. @MBuhari asked people not to protest but how do you stop this anger. @PoliceNG
Grammy @TodayFM951 pic.twitter.com/v2U4baqGVi

Police just killed a keke napep guy today at Rukpokwu (Mgbuchi) in Port Harcourt, and he ran away.
Please when will this stop?, when will the police stop killing us instead of protecting us?, if people should protest or retaliate now, Buhari will be disgusted. This is tiring tbh

An eye witness confirmed that the police officer had reportedly shot the Keke driver over pic.twitter.com/pFXda9xmmj