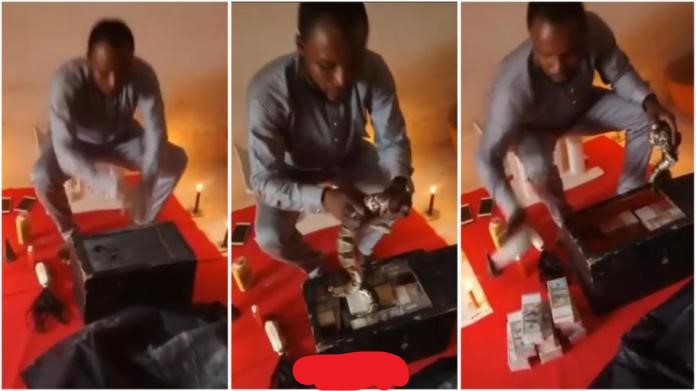 Wonders : Man Performs Money Rituals Using Live Snake – Video Will Shock U. As much as a greater number of people do not really believe in money rituals, it is still not clear whether they do exist, just like mermaids.

According to some religious leaders and traditional doctors, money rituals do exist & if one sacrifices their body part or blood of a close relative, you will one day wake up a rich man.

According to a 1-minute video clip, a man is seen splashing some liquids and powder on an empty black wooden box as he eventually closes it.

A man sitting in his red shrine then takes a black cloth and covers the empty wooden box. After that, he picks it up and covers it with his black cloth, again.

Surprisingly, he then opens the wooden box, and this time the stacks of money appear out of nowhere, alongside a brown middle-sized snake attempting to move out of the box filled with banknotes.

He eventually concludes by saying that he is based in Ghana and whoever seeks his services can be assisted as the distance is not a barrier.