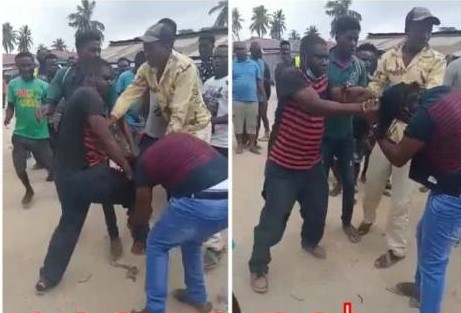 Upcoming Artist Busted With A Married Lady, Husband Reacted By Beaten Him – Video Below

Upcoming Artist Busted With A Married Lady, Husband Reacted By Beaten Him – Video Below. There was massive drama after Kenyan upcoming artist was busted with someone’s wife in a car heading to an unknown location.

According to social media reports, the husband’s wife trailed the artist after he got reports that he had been spotted with his wife.

Lol : Hot Lady Piss Over Herself During A Dirty Wrestle Fight With Her Boyfriend Side Chick – Video

The jilted husband, who was accompanied by some men believed to be goons, caused daylight drama as they stopped the vehicle and confronted the artist, vowing to give him a beating that he will never forget.

The said artist was left begging for mercy like a toddler soon after he was cornered.

In the trending video, the artist is heard claiming that the married woman that he was caught with is just a fan and not a lover as alleged.