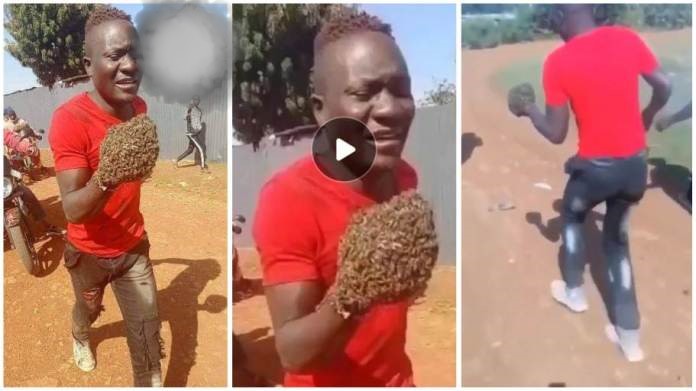 Thieves In Pain Return Items They Stole After Swarm Of Bees Taught Them A Lesson – Video Below. There was drama after two middle-aged men with sticky fingers were taught a lesson that they will never forget after stealing from someone’s house .

According to a post shared on Facebook, the thieves stole a Television set, a gas cooker and a cylinder from Ms Rashida Joweila.

Ms Rashida who noticed her items were missing hired the services of a witch doctor in Sofia Village to find the thieves.

The thieves identified as Wycliffe Kinara and Richard Duki were attacked by a swarm of bees and were forced to return the stolen items.

“I had never seen bees arresting thieves like it has happened today, they formed what appeared like a real handcuff on one of the suspects, while the other had a TV set stuck on his hands”, an eyewitness revealed.

The thieves were in pain when they returned the stolen items to Ms Rashida Joweila followed by a mob who were surprised by the way they were attacked by the bees.

The suspects claimed they stole the items due to unemployment.