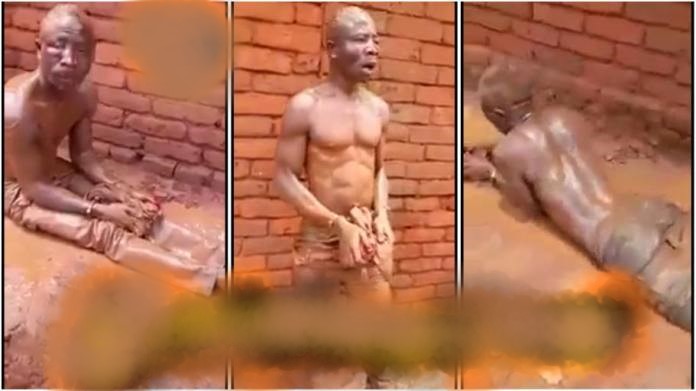 Thief Nearly Run Mad After Getting A Dangerous Punishment From Area Boys – Watch Below. Currently trending on social media is a video of a thief being forced to roll in a mud after he was caught stealing.

It is no longer news that anyone caught stealing in Africa immediately gets disciplined by angry mobs present at the scene of incident.

They get beaten up and some end up dead or saved by the police. A thief was recently left at the mercy of an angry mob after he was caught stealing..

Instead of killing him as most people do , the angry mob gave him a second chance but ensured that he received a punishment that will forever be etched in his memory.

The mob forced him to roll in the mud like a snake and dance with his hands tied after giving him some serious beating.

The video which has since gone viral on the internet, shows the thief rolling in the mud.

See the punishment this thug was given, after he reportedly caught stealing.. ????????‍♂️#Ghana #AtinkaNews #Nigeria pic.twitter.com/2eaAvtdQMv