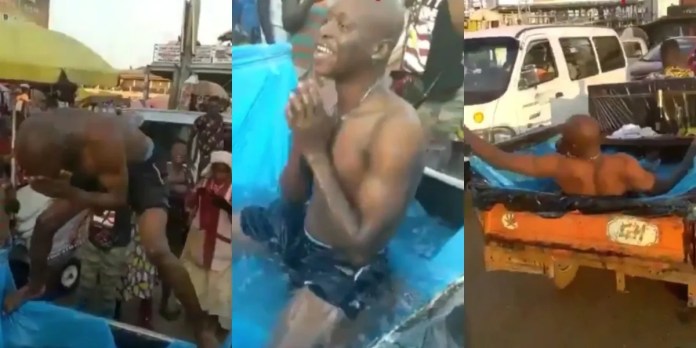 Teen Turns Aboboyaa Into A Swimming Pool To Celebrate His Birthday – Video. A young man has celebrated his birthday in grand style and in the most unusual of places – in the back of an aboboyaa which he had turned into a miniature swimming pool.

In a video sighted, the young man was seen chilling behind the tricycle as he was being chauffeured around town on his special day.

He had turned the carrier of the ‘aboboyaa’ into a swimming pool by lining it with polythene and filling it with water.

To make his day even more special, the young man added some music and also bought himself a bottle of champagne to celebrate.

The young man, together with his chauffeur, stepped into town to show off their cool swimming pool and it caught the attention of many people.

Some friends of the birthday celebrant could be heard shouting “birthday boy” and this even drew the attention of many people to the scene.

The birthday boy also showed off his swimming skills as he stood on the edge of the aboboyaa’s bucket and took a dive into his makeshift pool which attracted cheers and applause.

After showing off his swimming pool, the young man left the scene after he had caused massive vehicular and human traffic.