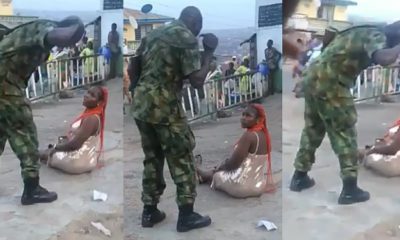 A soldier has been spotted in a video beating a woman for ‘indecent’ dressing in Beere community of Ibadan, Oyo state.

There was also a video evidence of him cutting the hair of some of passers-by after allegedly harassing and extorting them.

An eyewitness alleged that residents of the area now live in fear following the “extreme actions” of the “Operation Beast” soldiers in the state where there is no curfew.

One of the soldiers was also identified as “O. Adesina”.

This action by the soldier has generated massive and mixed reactions from social media users. Some have called for the soldier to be punished while some also praised him.

Here’s a soldier beating a woman earlier today in Beere in Ibadan, Oyo state, for what they term ‘indecent’ dressing. They also cut the hair of some of passers-by after allegedly harassing and extorting them. Swipe for more videos. But how can this happen just a week after chaos happened in Nigeria over police brutality? Was that struggle all for nothing?