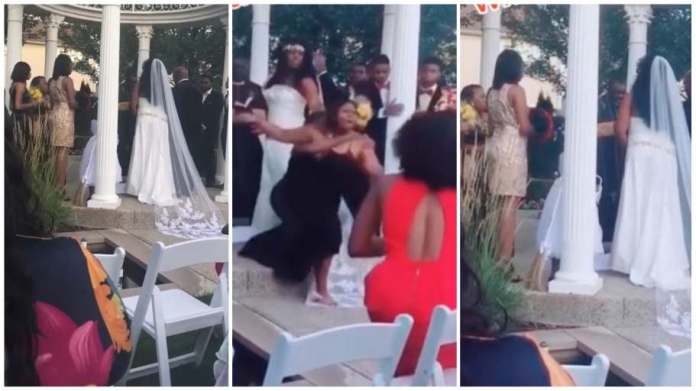 Side Chick Crashed Boyfriend’s Wedding – I Have Ur Baby (Video)

Side Chick Crashed Boyfriend’s Wedding – I Have Ur Baby (Video). A shocking video apparently showing the moment a pregnant mistress crashed her boyfriend’s wedding to another woman has gone viral on social media.

Being a side chick is all fun and games until your man decides to get married and that was the case for one couple, during their wedding ceremony.

After the bride and groom walked down the aisle, they prepared to say their vows but was interrupted by an unwanted guest.

Apparently, the groom’s secret, side girlfriend heard about the wedding and invited herself— but her presence wasn’t the only thing that caused jaws to drop.

In the video the minster can be heard reading the vows, before a voice from an unseen woman standing in the congregation cuts in.

Really Anthony? Are you going to act like you don’t know me? You didn’t take your psych meds today?” the woman yells.

Still out of shot, the woman then adds: “and I [have] your baby here. Anthony, I know you hear me,” to gasps from the congregation.

While the bride and groom refuse to turn around and face her, a bridesmaid appearing to be the bride’s daughter then pushes past them to throw her flowers and scream: “You better get out of my mama’s wedding, what is wrong with you?”