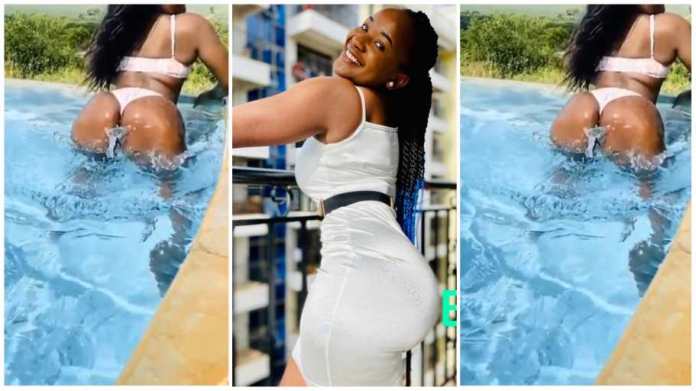 Sherlyne Anyang Puts Her Raw Toto On Display In A Swimming Pool – Video. Kenyan socialite and video vixen, Sherlyne Anyango has caused a stir on social media with her latest activity on Instagram .

Sherlyne Anyango, who ditched an office job to venture into the lucrative flesh peddling business, has been giving men on social media sleepless nights.

She saw an opportunity and grabbed it and currently, she is giving fading socialite, Vera Sidika, a run for her money.

Sherlyne knows how to utilize her big behind which resembles a pumpkin and that’s why men keep on checking her latest update on Instagram.

As some of you complain of being cash starved, Sherlyne is at the Coast enjoying life and while there, she posted a hot video clapping her famous derriere in the swimming pool.