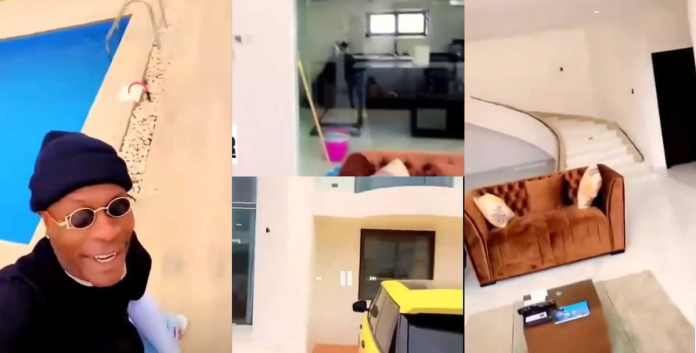 Shatta Wale announced his new acquisition in a new video that has been circulating on social media.

In the video sighted by us is seen inside the new house with some of his cars including the yellow Range Rover parked in there.

The Dancehall hitmaker is then heard saying that he is checking out his new place.

“Nigg* I’m just checking my new shi*. My new shi*. I got another pool,” an excited Shatta Wale shouted.

Video : Guy Who Was Seen Ma$turbating In Commercial Bus Beats Lady That Video Him – Watch

After showing the compound, Shatta Wale went inside the house to give fans a look at what was inside.

The interior of the house shows a neatly arranged living room with a big television set on the wall.

The kitchen is also found downstairs while a staircase leads to other rooms upstairs. Upon his entry into the living room, Shatta Wale asked one of the guys around how he saw his new place and he replied saying it was too dope.

“Yea. It’s too dope. They gon’ cry men. This is like the United States….” SHatta replied amid laughter.