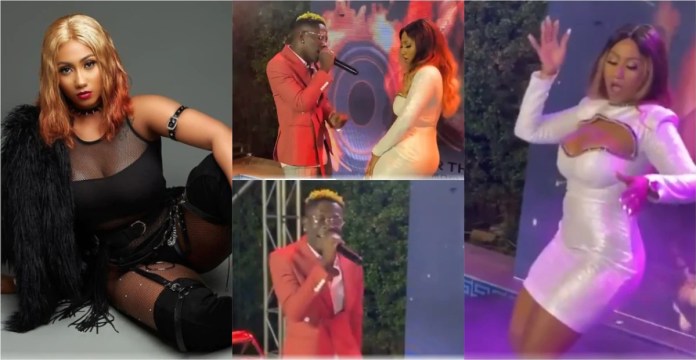 Shatta Wale Performs Mad Plus Hajia4Real At Her Single Single Release Party – Video. The Ghanaian entrepreneur and social media influencer, Hajia4Real, known in real life as Mona Montrage, has hosted a party to celebrate after successfully releasing her first single titled Badder Than.

At a time when the world is dealing with a raging pandemic, music has become a powerful means of coping with anxiety; Hajia4Real’s latest single and video are definitely what many need now.

The hugely successful socialite, who has added to her portfolio as an actress and now a singer, released her first song along with a video on Friday, November 27, 2020.

Badder Than is a slow tempo party song and the official video features her colleague socialite and actress Efia Odo.

Hajia4Real climaxed the successful release of her first single with a party at her luxurious mansion at Trasacco in Accra.

The entertainer reveled with her celebrity friends, including Becca, Shatta Wale, KiDi, Efia Odo, and others at her single release party.

The Ghanaian dancehall musician, Shatta Wale, who was present at the party, took a moment to perform with Hajia4Real on stage.