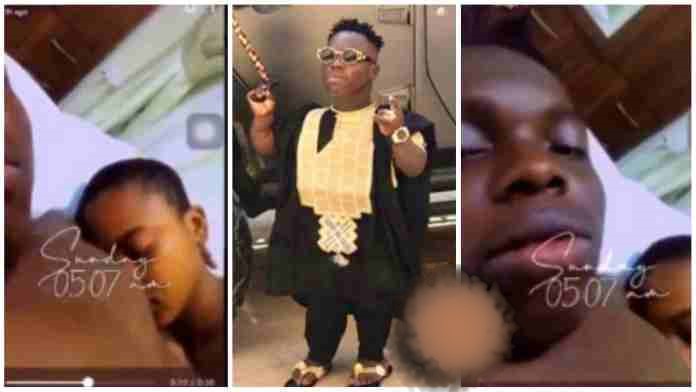 Shatta Bandle Reacts To His Viral B3droom With Under 18 Year Old Girl – Video Below. Whiles most Christians around the world were celebrating the resurrection of Christ Jesus, Shatta Bandle decided to resurrect his feeling with a young and beautiful fair lady.

From the video, you could tell that the young lady was trying to sleep after Shatta Bandle refused to let her sleep throughout the night for reasons known to himself.

He managed to wake her up all for her to place her head on his chest. She later opened her eyes just to gaze at the camera.

Well, a latest report chanced our outfit indicates that the young lady Shatta Bandle allegedly slept with is an underage girl who is below the age of 17 years and the last born of her beloved family.

Video : Ladies Fight Pants Down In Public Because Of A Guy – Video Trends

The voice behind the video also stated that Shatta Bandle went all the way to Bole on April 3rd with Aseda records for the purpose of signing a musician called Lexicon at the Wuripe Royal Lodge also known as (Bole Dubai) all for him to be banging the underage girl.

Shatta Bandle in reacting to the rumors going viral on social media, has debunked ever sleeping with the underage girl and guess what, he disclosed that there were quite a number of people in the room as at the time he took to the video with the young girl.

He added that he is going to pay them a visit and take more videos with the girls and that any man who has balls in between his legs can go ahead and take him to court and he will also show his evidence to prove that he was only vibing the the underage girl.

The diminutive actor used the opportunity to appreciate the people of Bole for treating him like a King during his visit and the signing of musician ”Lexicon”.