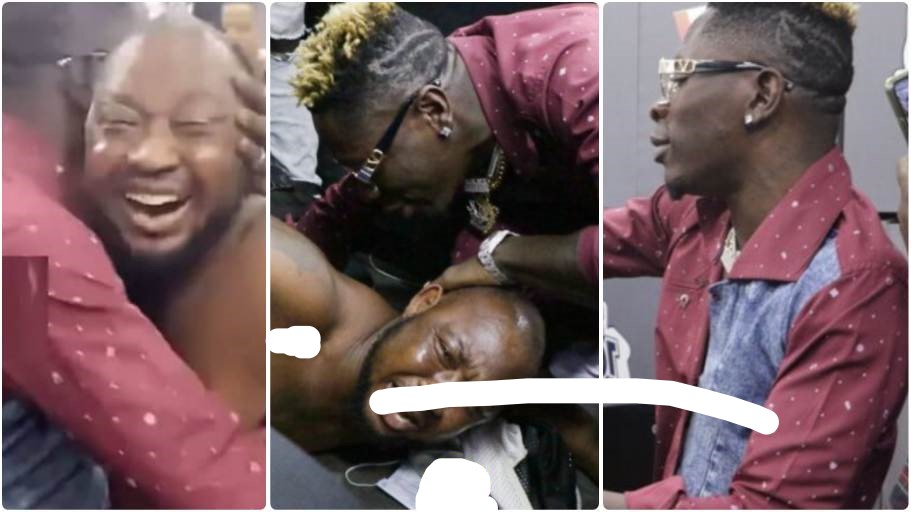 See What Shatta Wale Did To Trotro Driver Who Abandons Passengers To Meet Him – Video. Trotro driver, Liman Akwara, on Friday October 30, surprised his passengers when he ‘abandoned’ them suddenly to go after Shatta Wale.

The driver with his vehicle full with passengers, decided to park on the streets of Kokomlemle, after he noticed that Shatta Wale was present in Multi-Media Ghana building, for an interview on Hitz FM.

It was an emotional moment for a staunch fan of Dancehall King Shatta Wale when they met for the first time.

The two met in the studios of Hitz FM when Shatta Wale who is currently on a media tour appeared for an interview.

In a video from the encounter sighted by AtinkaNews , the man is seen prostrating before Shatta Wale after getting into the studio.

He then removed the top he was wearing to real the Shatta Wale tattoo and started shouting ‘daddy I beg you, bless me.”

Shatta Wale approached the guy on the floor and patted him on the back before lifting him up.

After being lifted up, the guy thanked Shatta Wale and also thanked Hitz FM for the opportunity to meet his idol.

Join Our  Telegram For More Leaks