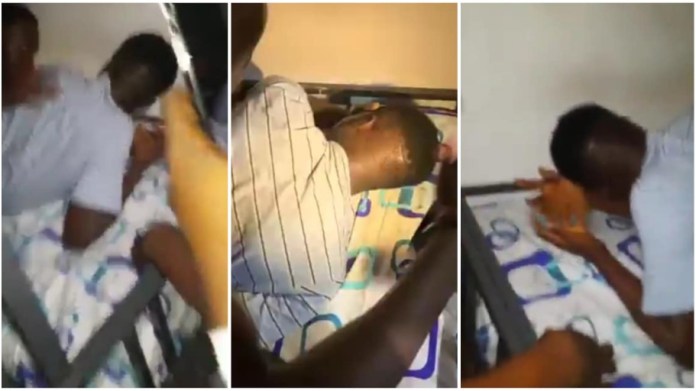 See Wat Students Did To A Maye After His Girlfriend Dumped Him, Story Is Sad (Video Below)

See Wat Students Did To A Maye After His Girlfriend Dumped Him, Story Is Sad (Video Below). KNUST student weeps as girlfriend Bridget breaks his heart; Conti Hall erupts with jam.

A Broken-hearted student of Kwame Nkrumah University of Science Technology (KNUST) has been sighted in a viral video shedding tears like a toddler after his girlfriend Bridget dumped him.

Video : This Is My Chocolate – James Brown Reveals His Boyfriend (Video Below)

Many boys are told while growing up to man up as they must not be seen crying, but some heartbreaking circumstances make them ignore all advice and give in to their human nature to cry.

Men in love also get deeply hurt and heartbroken like ladies and cry uncontrollable tears. Such is the case of a student of KNUST who was dumped by his girlfriend called Bridget .

In videos which have been circulating on social media, the young man is seen lying on his bed and weeping over the heartbreak.

Not long after, a whole group of students at the Conti Hall came together in a procession while they dance to a ‘jama’ (song) composed with the girl’s name.

Details as to why Bridget left the young man brokenhearted are not yet available to atinkanews.net but the videos have been gaining prominence on social media.

Currently, Bridget is one of the most popular subjects on Ghanaian Twitter.