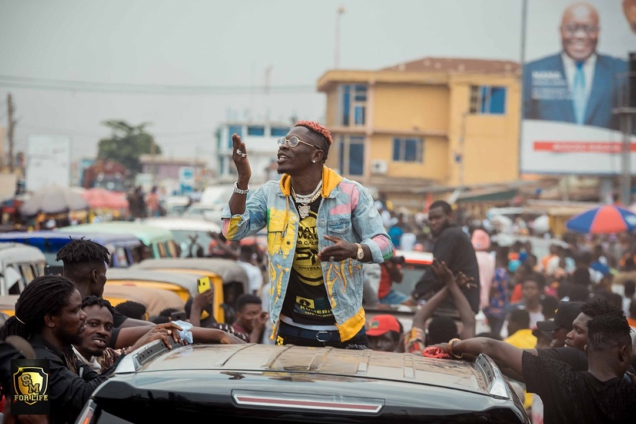 See The Warnings Krofrom Boys In Kumerica Issue To Shatta Wale N His Team. The latest development reaching us from Ghana’s garden city is as unbelievable as unicorns in 2020.

Self acclaimed dancehall king Charles Nii Armah Mensah Junior known in showbiz circles as Shatta Wale have been reportedly beaten by a mob of natives from Krofrom.

The issue is one that dives deeper than one can imagine. Shatta Wale who is on tour in the city per his kumerican invasion project was reportedly met by an angry mob at krofrom whiles going to shoot a video with kumerican Rapper Amerado.

The mob reportedly disciplined him as well as his team for breaking street codes way back as he refused to show up at his own friend Junior US funeral.

The natives of krofrom had already warned the dancehall King not to ever step feet in krofrom else he wouldn’t like how things will escalate.

Shatta Wale who turns out arrogant ignored their warning and walked right there with pride knowing very well what was at risk.

We are currently monitoring the situation to grab more details or some footages. Keep in touch with us for more. Report : Shatta Wale And His Team Allegedly Beaten By Krofrom Boys In Kumerica.

Krofrom boys warn Shatta Wale not to step foot in their city ???? pic.twitter.com/lyZ5jErj3j