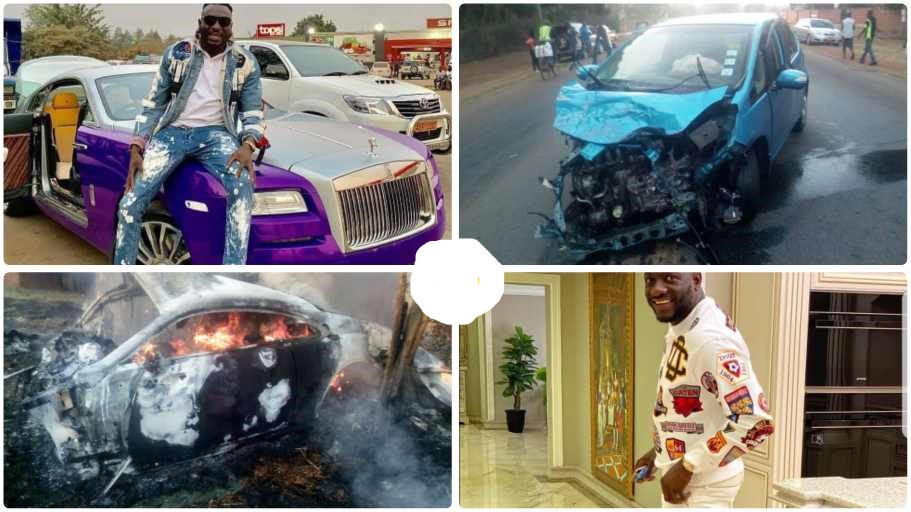 See How Genius Ginimbi Kadungure Died In Sad Fatal Accident – Video. Zimbabwe has woken up to the news that popular Zimbabwean socialite and businessman aka our Minister of Entertainment Genius Kadungure better known as Ginimbi is no more.

The owner of Dreams Nightlife club reportedly died during the early hours of this morning in a car accident along Borrowdale road as he was coming back from fitness bunny Moana’s birthday party.

He died along with three other friends, Elish, Karim and the birthday girl Moana.

A Twitter user called Danny says he was on the road at the time of the accident which happened because Ginimbi was speeding and overtook him then when he tried to overtake the car that was in from if Danny he got collided into a Honda fit and both cars burst into flames.

He was not wearing a seatbelt and was thrown out of the car.

I feel like hell, I dont even know which words to even use, Genius Kadungure has been called by God, he is no more. He was in a terrible accident around 5am, he died on the spot with 3 of his friends in the car, Karim, Elisha and Moana – Ms Shally

Everyone is in disbelief including Sizwe Dhlomo and Freeman and the tributes are pouring in.

Genius Kadungure~This is unbearable. A youngman who worked hard and enjoyed hard is no more! The flower has wilted! Go well Boss Ginimbi. MHDSRIP pic.twitter.com/Cj2TR3EwgM