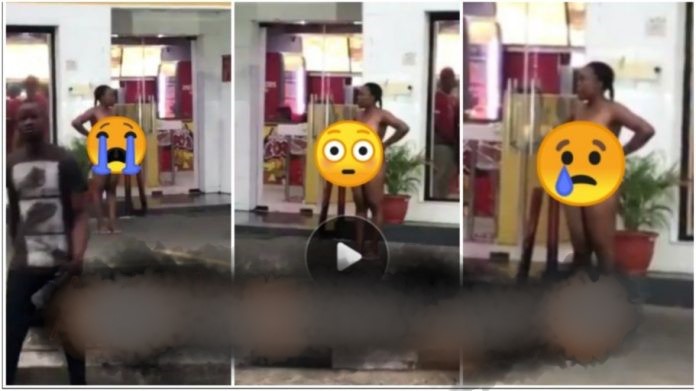 Saxy Girl Runs Mad After Allegedly Sleeping With A Married Man – Video. A yet-to-be identified lady has lost her mind and is displaying signs of insanity after she allegedly lodged at a hotel with a married man .

In Africa , a popular belief holds that when a person runs mad, the cause can be traced back to an evil character with the intent of harming them or someone who they have offended.

A young woman has fallen to the streets to display visible acts of insanity. With a ruffled hair, unclothed and bare feet, the woman has been roaming the streets.

While many do not know the reason for this show of madness, a woman has taken to social media to allege that the unidentified lady has turned mad because of intimate involvement with a married man.

The netizen who also shared video of the woman running wild in front Of chicken republic made this strong accusation against her on a Facebook group .

Meanwhile, Some eyewitnesses can be heard in the background of the video saying she might have been used for ritual by a man she may have gone out with on Valentine’s Day. However, this remains unconfirmed.