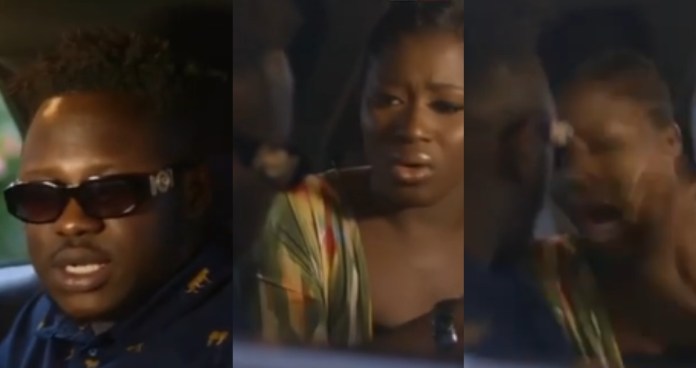 Reason Why Medikal Slapped Fella Makafui After Cheating – Watch Video. AMG Medikal slaps Fella Makafui after she caught him cheating on her in latest video

Ghanaian actress and entrepreneur Fella Makafui has released the trailer for her first movie produced under her own production, Fella Makafui Productions and to the surprise of many, it features her boyfriend, Medikal

In the movie trailer, Medikal and Fella got entangled in relationship issues and were sorting it out only to turn out Medikal was also cheating on Fella.

Medikal is seen expressing his love for Fella Makafui and begging her to stop following the small small boy in the area since he can provide her with anything she needs.

A call then through medikal Phone with the name honey, this made the argue and Medikal ended giving Fella Makafui a slap on the cheek. Check it out below

Fella in an attempt to snatch Medikal’s phone from him to see who’s calling got the slap of her life.