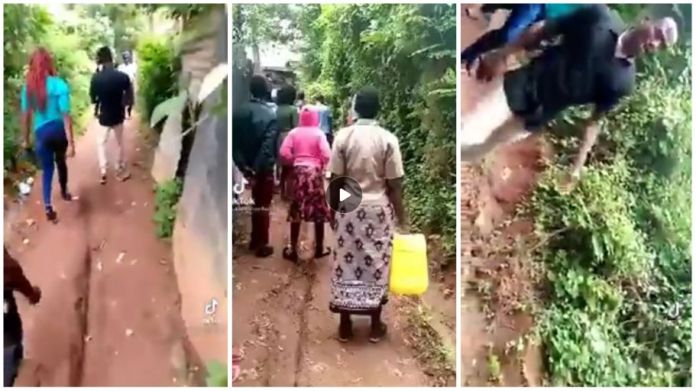 Prostitute Gave Customer Mad Disgrace In Town After He Failed 2 Pay – Video Below. A s3x-starved man met his match recently when he got into a brawl with a prostitute.

Download : Abna – Something Must Kill A Man (Forget The Rest Riddim) (Prod By BodyBeatz)

There was drama after a prostitute confronted a middle-aged man who had picked her from the streets and took her home for a sleepover.

Trouble started after he failed to pay her the money they had agreed upon after he satisfied his manly needs.

Watch : Lady Release A Heavy Slap On Police Officer Who Was Drunk N Hit Her With His Car – Video Below

A video that has spread online like wildfire shows the no-nonsense flesh peddler causing a commotion, demanding to be given what belongs to her.

She confronted the young man who was covered in shame and informed him that for the time she has been in the flesh peddling business, no man has ever chewed her on credit.

Video : Men Enjoy Me In Bḛd Even Though I Have Pḛn!s & [email protected] (Hḛrmaphrodite) – Female Musician (Video Below)