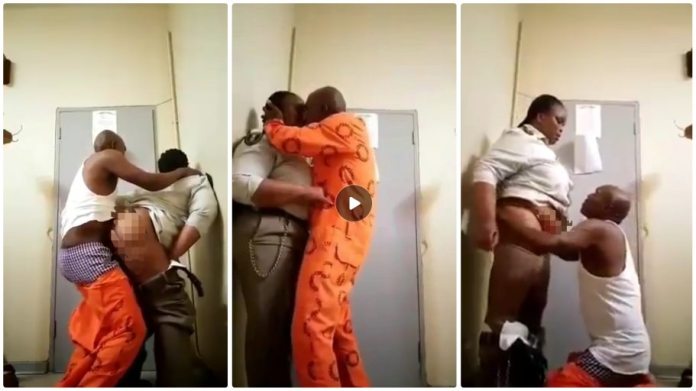 Prison Warder Chop And Eat Inmate in viral s__xtape – Watch Now. The department of correctional services has launched an investigation following a video of a prison warder having s__x with an inmate at the Ncome Correctional Centre in KwaZulu-Natal.

In videos that have been circulating on social media, the official, in her uniform, can be seen engaging in s.e.xual activities with the inmate.

Video : Thief Ran Into The Ocean To Escape Police Arrest – Video Below

The video has now made its way to the public domain, landing the official in hot water.

“A video with flustering scenes of alleged s3xual activity between an official and an inmate at the Ncome Correctional Centre, KZN, has left the Department of Correctional Services (DCS) appalled, embarrassed, and gutted.

Watch : Lady Treats Shatta Bandle Like A Baby As She Baths N Feeds Him – Video

“S.3.xual activities between inmates and Correctional Officials are shameful incidents that can never be ascribed to what is expected of our officials.

“Correctional Officials are expected to abide by a code of conduct, and despicable acts of s.e.xual activities with inmates shall never be tolerated.

“The official involved has been identified and she will be subjected to a disciplinary process with immediate effect. Disciplinary measures have also been instituted against the inmate,” said the department in a statement.