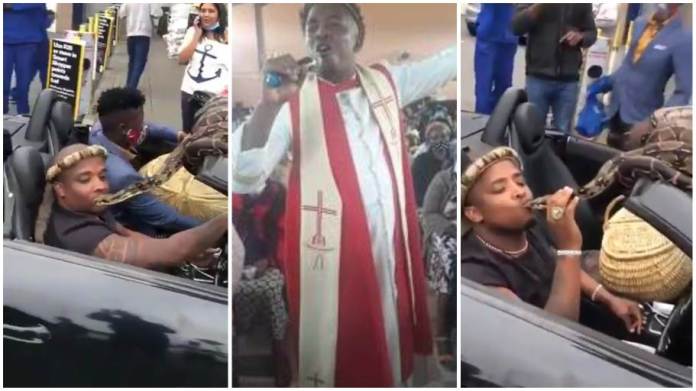 Pastor Captured On Camera Kissing And Playing With Big Snake In Traffic – Video Below. Pastor of New Beginnings Ministries, recently left passers-by shocked after a video emerged showing him with a huge snake hung on the windscreen of his Mercedes Benz.

In the year 2020, there were many stories about how rich people accumulate wealth and it was alleged that most of them own snakes and belong to some sort of a cult.

Video : Guy Charm Water From His Stomach To Wash His Dirty Shirt – Video Below

Not just that, they were also alleged to be making human sacrifices to feed these snakes.

Just when netizens got used to all of that and forgot about these snakes, a video of a man of God was seen driving his mercedes and taking his snakes for a ride whilst kissing them.

Treasure Nkwabela, who runs a church named New Beginnings Ministries, in Eastern Cape, is the man behind the wheels of a Mercedes Benz that was driving around with snake.

What traumatized many is that he was driving around with the snakes in public, with no fear who is watching.

He also has bodyguards who follow him in his Range Rover and they carry guns whenever he is in public.

Some people are defending him saying that these could just be exotic pets for him and that there is nothing deeper than that.

Some say that they are more than pets and quitecoften, when the snakes die the owners become poor again.

Madoda & then? A whole Snake? pic.twitter.com/pSupeB3E7U

Madoda & then? A whole Snake? pic.twitter.com/pSupeB3E7U