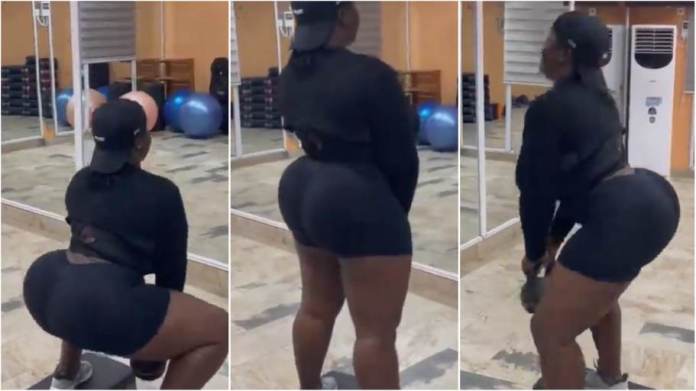 Kumawood actress, Maame Serwaa real name Clara Benson has given her teeming fans something to talk about in the new year.

Maame Serwaa’s abrupt change from a modest lifestyle to a complete ‘slay queen ’ is a whole conversation that has engulfed social media for a while.

It has been the case that in the past she was used as a precedent for her colleague, Yaa Jackson, who has worn the ‘bad girl’ tag with a badge of honour.

But it appears Maame Serwaa has gradually joined the league of the most talked socialites in the country with her lifestyle change.

Then the conversation shifted to her constant flaunting of cʋrves on social media which landed many in shock.

But Maame Serwaa perhaps is enjoying the public attention as she has dropped another video that captures her at the gym working out sєdʋctivєly.

Must See : Shatta Wale Kisses Akuapem Poloo And Rain Cash On Her Son In Public – Video