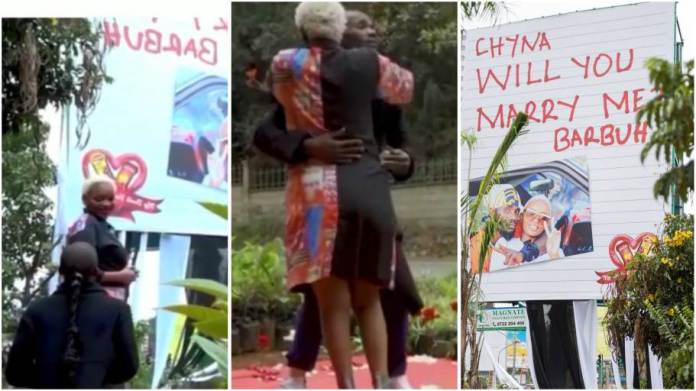 Man Rents Big Billboard 2 Propose Married 2 His Pregnant Girlfriend – Video Below. A middle-aged man has left tongues wagging after he hired a billboard to propose to his pregnant girlfriend.

When it comes to spending the rest of ones’ lifetime with the love of their hearts, they often try to make the moment they pop the question an unforgettable one.

Gone are the days when proposing to ones’ lover used to be bland and social media has helped publicise the most unique and interesting marriage proposals.

These days many couples try to outdo themselves. Some men prefer to ask the life changing question in the full glare of viewers while others like it private.

The man, Starboey Money(on social media) who identifies himself as a market analyst but answers to his nickname Barbuh Stephen hired an entire billboard in Nairobi and boldly wrote to his wife, Chyna.

On the billboard, Barbuh Stephen is asking her to marry him with a picture of them together being a part of the billboard.

“Chyna will you marry me? Barbuh” the billboard read.