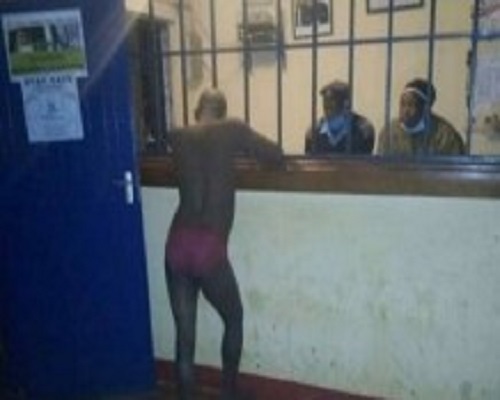 Man Raced To A Police Station After He Was Seen Eating Military Personnel’s Wife – Watch N Read. There was drama after a man stormed a police station in Embakasi crying for help, after he was busted with a wife to a Kenya Defence Forces (KDF) officer.

According to information shared on a popular crime reporting Facebook group that is run by cops, the military officer arrived home unannounced and busted the man busy drilling his wife.

The cheating wife used to lie to her clandestine lover that her husband died during the Dusit Terror attack and invite him to her matrimonial home but the man was alive, busy serving the nation at Nanyuki Barracks.

His proverbial forty days reached on Saturday night after he was busted by the soldier eating the forbidden fruit.

The poor man stormed a police station naked after the military officer chased him like a rat, threatening to kill him for messing up with his wife.

Here’s a photo of the man at the police station begging cops to save him.