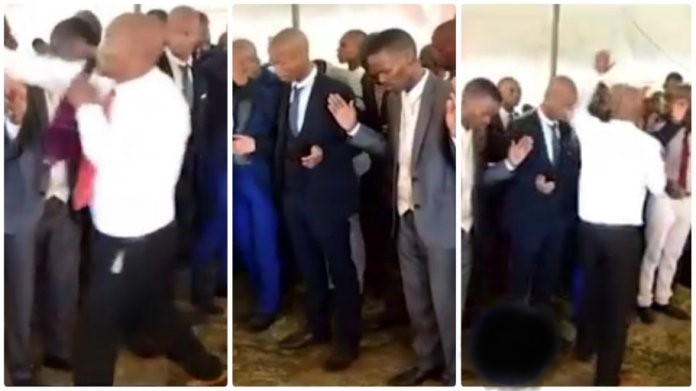 Man Of God Seen Slapping Church Members In The Name Of Deliverance – Video Below. A video of a yet-to-be identified pastor dishing out hot claps to his congregants is trending on social media.

An influx in church ministries across the globe continues to bring a corresponding confusion into the once respected spiritual arena.

Unlike in the past when God’s Word was taken serious and only preached by the ordained, nowadays any one can become pastor by a stroke of a pen as long as he or she can open a church and call himself big titles like a ‘Bishop’.

The owners of such places of worship having noticed how people especially women are the most vulnerable species that can be easily manipulated into believing anything said on the pulpit, have upped their influence towards that direction.

Video : Pastors Wife Locked Down His Church After Catching Him With Girlfriend In A Secret Wedding – Video Below

They make sure people throng their churches with problems that are and can never be solved even after five years of service attendance.

In a video which landed on our desk this morning of Friday April 9, a smartly dressed rogue male preacher is seen praying for his congregants while slapping them on their heads.

People are asking why churchgoers allow their pastors to do such to them.