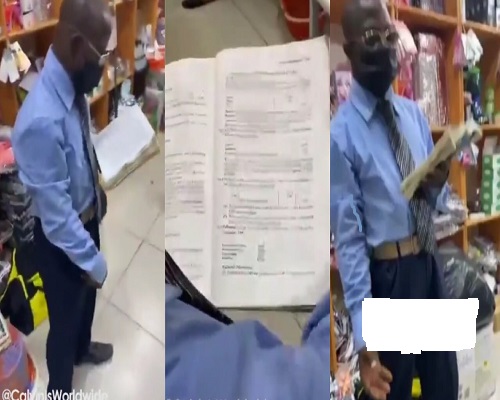 Man Of God Seen Preaching With Accounting Text Book – Video Will Shock U. Pastor caught on camera preaching with accounting text book instead of bible in viral video.

A new trending video of a street evangelist passionately preaching in a shop has caused a stir online due to the fact that he was preaching from an SHS textbook.

In a video sighted on Instagram, the vibrant preacher who was seen dressed smartly was preaching in what looked like a store.

The young man who was preaching in local language Twi, appeared to be preaching about judgment day and was heard admonishing people to change their ways.

While preaching, one of the people in the store noticed something off about the book from which the evangelist was referring his quotations.

A closer look at the ‘Bible’ the preacher was using showed he was not even using a Bible at all but rather using a textbook.

It appeared the preacher who was so passionate about his word, was using a senior high school Accounting textbook.

The preacher pointed to the book and indicated he was reading from ‘chapter nine’ but one man in the store accosted him.

s he was challenged, the preacher man indicated that he was rather reading from ‘chapter two’ but what he was talking about was nowhere to be found in ‘his bible’.