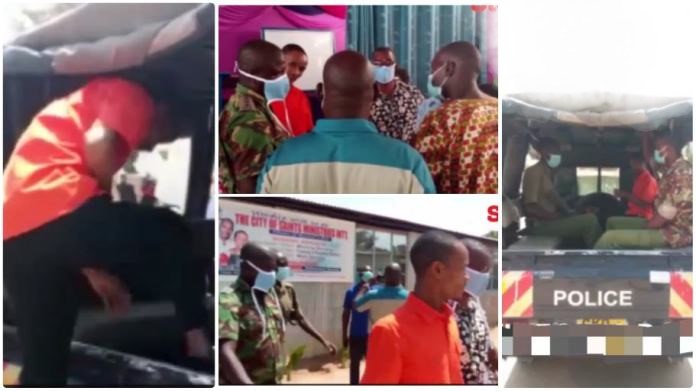 Man Of God Arrested After Prayer 2 Resurrect Dead Boy In His Church Goes Wrong – Video. A Kenyan pastor has been arrested in Lodwar while trying to resurrect a dead child… An influx in church ministries across the globe continues to bring a corresponding confusion into the once respected spiritual arena.

Video : Guy Who Was Seen Ma$turbating In Commercial Bus Beats Lady That Video Him – Watch

Unlike in the past when God’s Word was taken serious and only preached by the ordained, nowadays any one can become pastor by a stroke of a pen as long as he or she can open a church and call himself big titles like a ‘Bishop’.

The owners of such places of worship having noticed how people, especially women are the most vulnerable species that can be easily manipulated into believing anything said on the pulpit, have upped their influence towards that direction.

Trending : Video Of How A Yahoo Girl Asked Her Client 4 A Card Trends Online – Watch Below

They make sure people throng their churches with problems that are and can never be solved even after several years of service attendance.

Fraudulent Tithes and conmanship takes place in such places with a lot of reckless abandon. Members are drained dry like ticks on milk cows.

A rogue pastor identified as Paul Macharia, the founder of City of Saints Ministry International Church, convinced parents of the dead child that he was capable of performing a miracle to resurrect their late son.

Instead of taking the body of the child to the mortuary, they took it to church, expecting the miracle.

The child’s body started decomposing after it was left in the church for many hours as the pastor desperately tried to perform the miracle that proved futile.

Police swung into action after they were informed of the bizarre incident and arrested the pastor. The child’s body was then taken to the morgue.