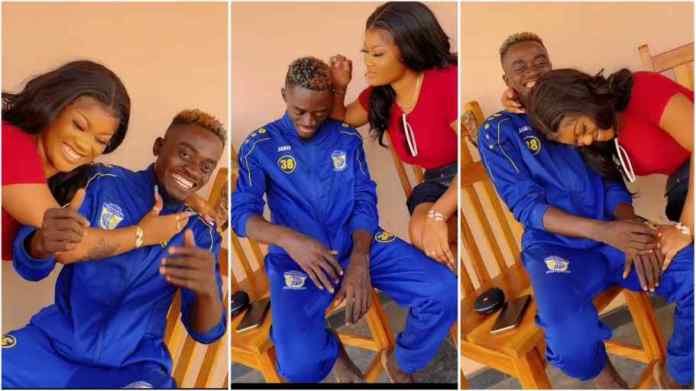 Kumawood actors Kwadwo Nkansah famed as LilWin and Sandra Ababio have been spotted in a new lovey-dovey video on social media.

It has long been rumoured that the Kumawood stars are an item but noting has since been confirmed.

In one breath, Nkansah Lilwin will be insulting bloggers and presenters for asking about Sandra then he later goes on social media to admire her beauty.

Must See : Sarkodie Teaches Fans How To Solve Problem And Make Money – Watch

Sandra Sarfo Ababio will also be granting interviews spewing blatant lies to the listening of Ghanaians.

In a recent interview with Abena Ghana on the “Journey Show”, the actress clearly stated that she has never been in a romantic affair with Lilwin and such a thing will also never happen.

However, a new video has emerged which gives an account of Sandra enjoying the company of Lilwin.

In a new video sighted on Instagram, the duo was seen seated in some chairs in what looked like a porch as they sang a song.

They were seen beaming with massive smiles as they composed their own acapella version of a song that was playing on a device.

Sandra Ababio was seen in the video placing her hand around the neck of the comic Kumawood star as they both sang the song.

The joy on the face and the sparkle in the eyes of Sandra speaks volumes about her true emotion and affection for Lilwin .