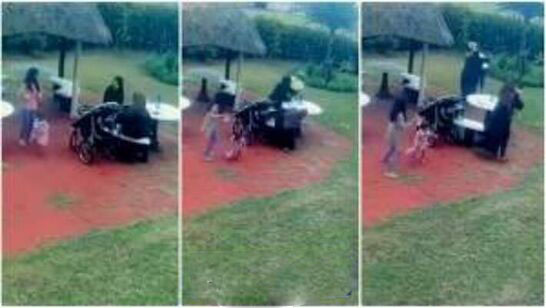 Lady Wrestle With Thief Who Try To Snatch Her Phone And Bag – Video Below. This woman from a flat complex near Durban Beachfront has become a viral star overnight, after she was targeted by a hapless thief on Wednesday afternoon.

The crook picked the wrong victim on this occasion, and he was forced to flee from the scene.

Video : Pah Pah Taxi Driver Nearly Die After Trading Blows With Another Driver On The Street – Video Below

In the video clip, which has been shared across social media, two women can be seen in a public garden with their kids. In the background, the would-be thief can be seen scaling the fence and approaching the family.

He sneaks up from behind, and as he attempts to grab their possessions, one of the mothers springs into action.

Our have-a-go hero takes a few swipes at the bewildered robber, and her fightback catches this coward cold.

She then gives chase to the potential assailant, as he sprints away from the scene.

The footage comes to an end as the mother reunites with her family and friend, and as it transpires, no-one was hurt in this altercation.

Don’t joke about the ninjas pic.twitter.com/o51QNzT4Ta