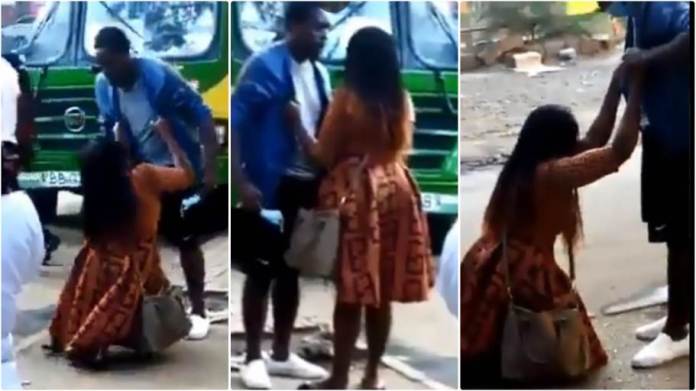 Lady Cry N Begs boyfriend Not To Leave Her – Watch Video N Be Sad. A viral video of a woman going on her knees begging a man (boyfriend) for forgiveness has set tongues wagging on social media platforms.

In the video that has spread online like wildfire, the lady is seen kneeling in the middle of a busy street while trying to cool down her boyfriend, who appeared infuriated.

As the video starts, the woman and man are seen having an evidently uncomfortable conversation on the streets of Nairobi with the lady holding the man’s jacket tightly.

In a matter of seconds, she starts sobbing while still holding the man’s jacket and goes on her knees to beg him

As the man notices the amount of attention they are both getting, he tries to get the lady’s hands off his jacket but her strong grip continues to hold on.

Onlookers start gathering from a distance to watch the unfolding drama but the with lady unashamedly continues to plead the man who is seemingly losing his patience.

The spectators can be heard saying “anaachwa na hataki kuachika, wanabreak up (He is breaking up with her but she can’t accept it)”.

The video sparked reactions on social media with one side netizens blaming the man for the drama while the other side said the lady went too far with the persuasion of the presumed lover.