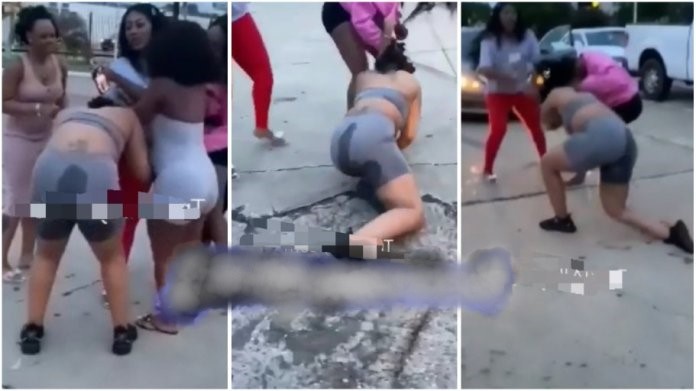 Hot Lady Piss Over Herself During A Dirty Wrestle Fight With Her Boyfriend Side Chick – Video. A video making waves on social media show a slay queen who have piss all over herself while fighting in the street with another lady.

While some say the fight started because of disagreement over a man who must have deceived them both , others stated other reasons.

Even though the real cause of their fight is unknown, the two women in the video went ahead to fight themselves almost stripping each other of their clothes.

The fight which lasted over one minute, was filmed by several people who stopped to watch the drama unfold in the streets over.

Video : Ayisha Modi – Shatta Wale Is A Useless Successful Man N Had A 3Some With Michy & Hajia4real – Watch Video

The so-called man they were fighting over was no where in sight, however the ladies seemed ready to fight till one of them gives up and resolves to stay away from the man.

Trending : Afia Schwar Tells Mzbel – I Have Forgiven U Promises To Take You To Church (Video)

Slay Mama Piss On Herself While Fighting Her Opps !… ????????#AtinkaNews #Ghana #Nigeria pic.twitter.com/0p2tnQo9KH