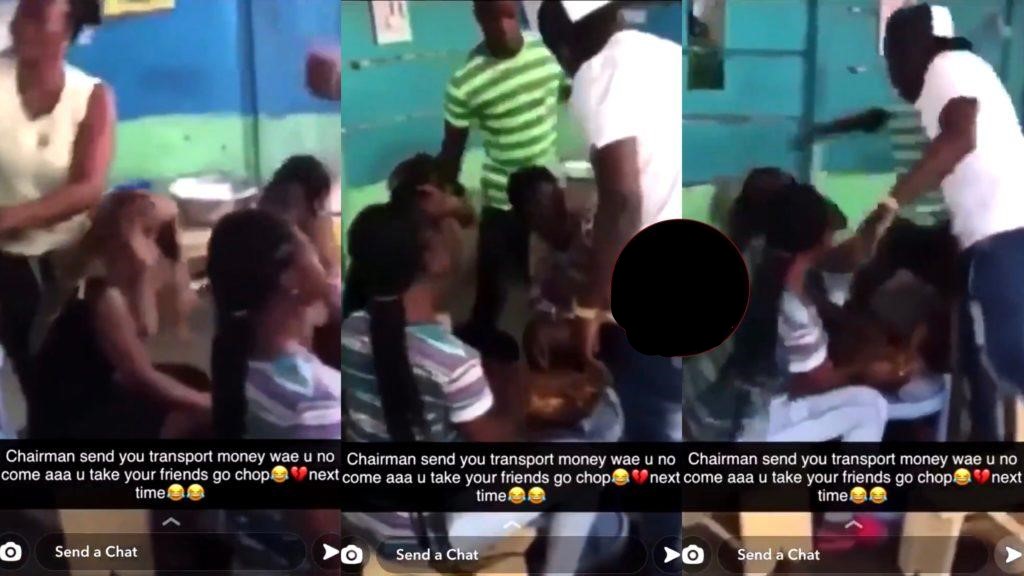 Guys Beat Lady For Not Showing Up After Taking Transport Money – Video Below. Viral video shows how Slay queens was beaten mercilessly by guys they took transportation money from and never showed up.

Nowadays it has become a habit of some ladies to take transport money from guys and refuse to show up. However, some ladies were not lucky enough as they receive the beatings of their life after they took money from these guys and never showed up at their house.

It was drama at a local restaurant when two guys decided to give severe beatings to the ladies who took money from them as transportation for a visit but never showed up.

According to the video sighted online, these ladies demanded transport when the guys asked them to pay them a visit at their homes.

The guys also willingly sent the money on the condition that these ladies will fulfill their part of the contract.

Well, these ladies, according to reports, took the money and decide to prepare some food with it. In effect telling the guys that:

WE HAVE TAKEN THE MONEY BUT WE ARE NEVER GOING TO SHOW UP.

While enjoying the money, these guys showed up from nowhere and requested their money. These ladies, who have already spent the money were at their wit’s end since they feel embarrassed for cheating on these men and they had no money to pay them back.

Out of anger, the guys descended heavily on the ladies as they receive slaps from all angles. The ladies had no other choice than to receive the slaps in good faith as punishment for breeching their part of the contract.

Ladies B e a t e n By Gang Men For Taking Transport But Did Not Show Up As Promised ????????… It serious abs funny #sirslayout SIRSLAYOUT.com