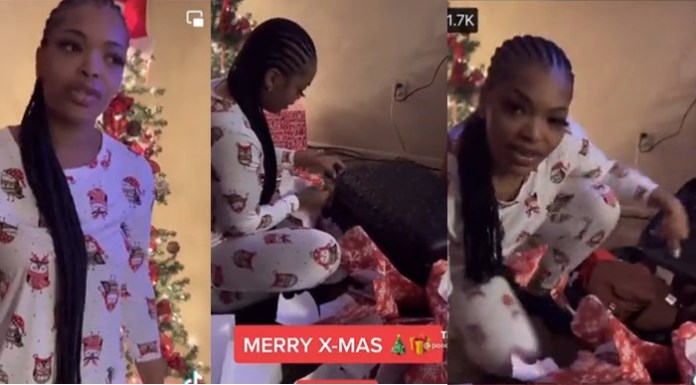 Drama ensue as man kicks out his girlfriend by 12 midnight after finding out she cheated with her male bestie.

A man has strategically kicked out her girlfriend from his house on Christmas day at midnight after finding out that she has been cheating on him with her bestie.

The man wrapped the belongings of the girlfriend like a Christmas gift as if they’re traveling and made her believe he’s gotten her something for the festive season.

Must See : Cardi B Trends As She Gifts Husband Offset $2 Million To Celebrate Him On His Birthday – Video

But as she unwrapped it and opened the box, she found her clothes inside, and it left her looking confused.

He then told her that she should carry her things and leave his place because he found out about her affair with a man named Zoe.

She initially pretended to be unaware of who or what he was talking about, but later admitted to knowing who Zoe is.

The girlfriend further said the man in question is her co-worker whom her boyfriend knows is her best buddie, and brother. But her man questioned her on whether her male co-worker’s girlfriend knows they are having an affair.

He then insisted that she packs her things and move out because he does not want to hear anything she has to say.