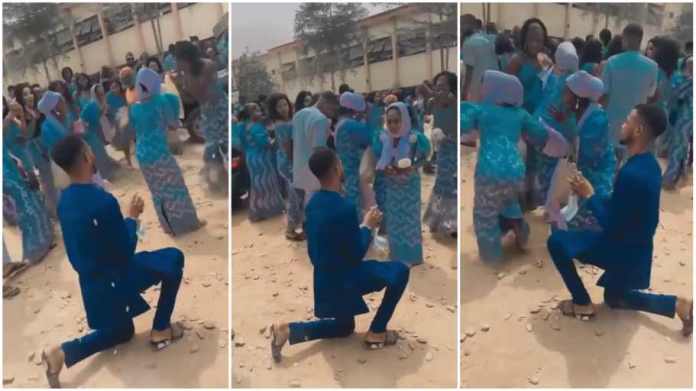 Guy Cry On Dusty Ground As Girlfriend Reject His Proposal – So Sad (Video). A young man was left hanging on a dusty ground as his surprise public proposal to girlfriend was met with a weird reaction .

While some people do not fancy surprises, others receive theirs in weird manners and this is largely dependent on the nature of the activity.

A lady’s reaction to her boyfriend’s surprise marriage proposal has left many people amused on social media.

In a short video from the incident shared on Instagram, the lady backed her friends and was engrossed in an activity with them when the boyfriend pulled the proposal on her.

It was her friends who noticed him on one knee behind them and called the lady’s attention to it.

Viral : Captain Smart Lay Out Name Of Presenter That Pushed Him To Quit Adom Fm – Video

However, she immediately burst into weird dance moves with her friends on seeing him, leaving the man on the ground.

It couldn’t be confirmed if the lady accepted the proposal later on or not, but her dance reaction was unexpected.