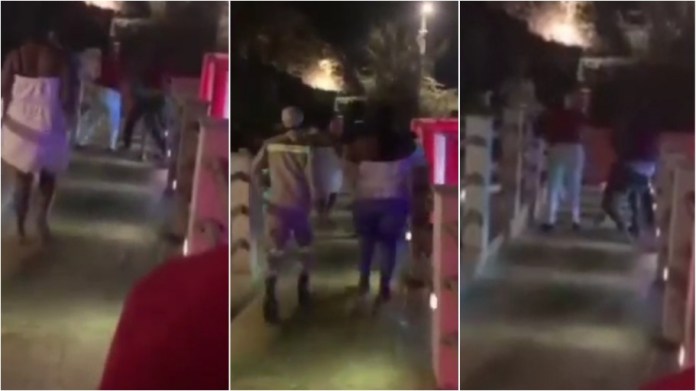 Guy Catches Wedded Wife Chopping Luv With Another Man On Valentine Eve – See Wat Happen. A man has been left totally devastated after he caught his wedded wife red-handed having a good time with another man on valentine’s day.

In the video sighted by Atinkanews.net , the married man is reported to have tracked his wife to a special location where there was a Valentine’s Day event happening.

On getting there, he realized that his wife was spending time with another, man and it caused him to create a scene.

The romantic evening event was marred for the married woman and her side guy along with others who had come to the venue to spend time with their significant others.

What ensued after the man caught his wife with another man was an eyesore as he instantly jumped to attack the side guy.

Trending : I Will Die If Kuami Eugene Don’t Love Me Back – Lady Weep bitterly (Video)

Some people who were present at the event tried separating the fighting men, but as has become a normal trend, others took out their phones and captured the moment on camera.

One of the people recording the incident could be heard narrating what was happening and revealed that the married woman had been caught with her lover by the husband.