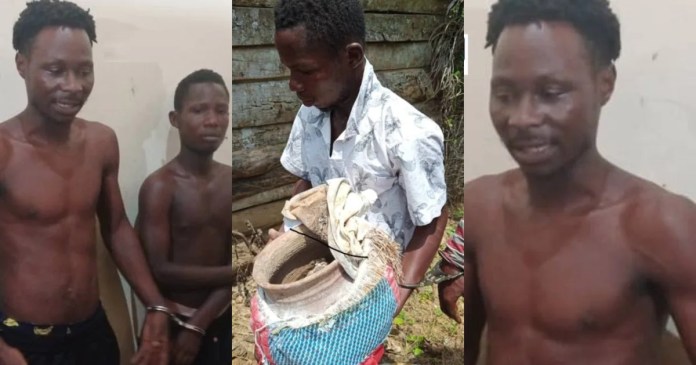 Driver Caught Transporting Human Bones 2 Fetish Priest – Watch Below. The Police in Kraboa-Coaltar, the District capital of Ayensuano in the Eastern Region have arrested two suspects who are assisting in an investigation over alleged trading of human bones with a spiritualist.

The suspects, a taxi driver, Awatey David Okra, 22, and Amenuvor Nicholas, 20, were grabbed by the Unit committee chairman of Kwamekyere Electoral Area, Aware Isaac who sent them to the Police station.

According to the Unit Committee member, he intercepted the Daewoo taxi cab with registration number GE 5063-15 onboard with the above suspects from Suhum direction towards Kwamekyere, for being suspected of carrying some contraband goods.

Video : Man Of God Seen Slapping Church Members In The Name Of Deliverance – Video Below

A police report sighted by DGN Online, said one of the occupants managed to escape with a pan containing some unidentified materials, and when a search was conducted in the taxi, saw a black suitcase containing some old bones suspected to be that of human bones.

He said they managed to re-arrest the suspects and when interrogated, they alleged to have been sent by one Djoka (currently at large) of Niifio near Suhum to deliver the suspected bones to a fetish priest named Gagba of Kwamekyere village.

The Police together with the suspects, visited the shrine of the said Gagba but he fled before the Police arrival.

The Police said upon a search at the shrine, they spotted a newly buried pot within the premises containing an old skull also suspected to be a human skull and a pan stuffed with fetish regalia.

The suite case with the bones, the pot containing the skull, and the pan with its contents were retained for evidential purposes whilst the two suspects are detained for further investigation.

Meanwhile, efforts are underway to trace and apprehend the other accomplices for the appropriate action to be taken and also to send the bones and the skull to the Police Hospital mortuary for preservation as investigations are ongoing.