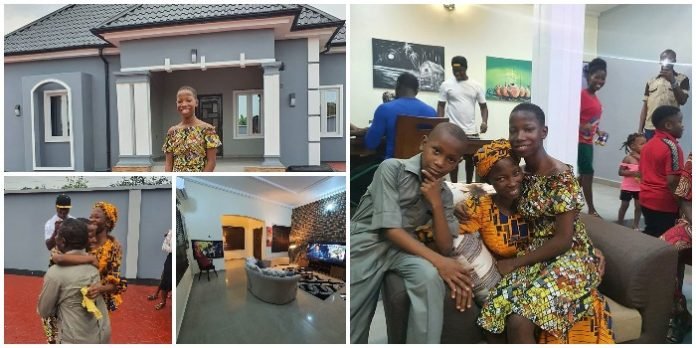 Comedian Emmanuella Who Is 10 Year Old Builds New House For Mother – Video Below. Nigerian YouTube child comedian Emmanuella Samuel, popularly known as Emmanuella, has changed the story of her mother from a tenant to a homeowner.

Emmanuella, has put a smile on her mother’s face after she built a befitting house for her.

Capturing her gift to her mom, 10-year-old Emmanuella noted that she built the house specifically for her mother’s supportive and prayerful role in her career.

According to her, the mom wanted a portable house and that is exactly what she gifted her while she promised to complete a bigger one, a mansion, by the year 2021.

Emmanuella also cracks a joke about her mom’s spiritual status as she promised that the mansion she will build for her next year will not make them go to hell.

Her caption reads: “I built this for u mom. For all the prayers, all the encouragement, and support. Mummy I know you said u want a portable house and this is it. But forgive me because I must complete ur mansion for you next year. Don’t worry it won’t make us go to hell my super Christmas mummy. I love you.”