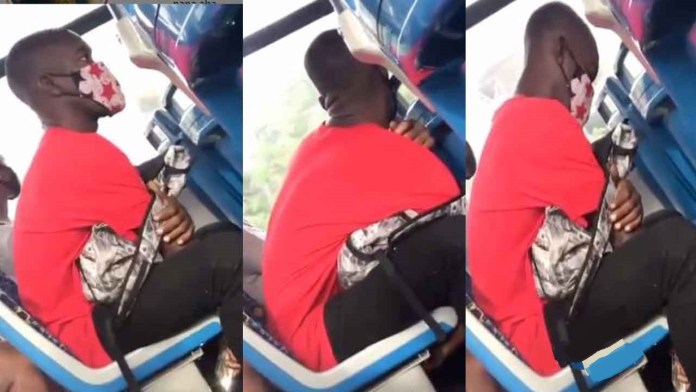 Busted – Guy Seen Privately Recording Gyal Private Part In A Moving Car – Video. The man whose identity is yet to be obtained was spotted wearing a nose mask and red shirt as he bent down while lowering his mobile phone to record the woman.

It looked like he was trying to capture the woman’s middle as s he wore a skirt since the skin of her legs were showing.

rom the footage, he acted as if he was getting something from the ground, but while doing so, placed the phone so well to capture everything so clearly.

Unluckily for the young man, another person in the same bus who saw what he’s up to also took out his phone to record him, eventually posting it online for all to see.

The video has since gone viral after it surfaced online and some Ghanaians are not happy about it.

Man caught inside a public bus sticking his phone camera under the chair to snap lady’s legs. . . Follow @mediagist for more exclusive updates.