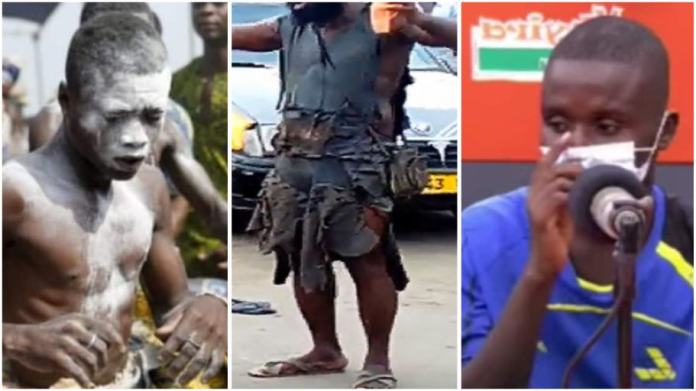 After Using Little Girl 4 Sacrifice, 25-year-Old Student Goes Mad – Video. A young Ghanaian man is gradually going insane after he got himself involved in a cult ritual involving the use of a seven-year-old girl.

According to the young man who is 25-years-old, he sees scary images whenever he is alone, making him run away most of the time.

Narrating his story on Kumasi-based Nhyira FM, the young man revealed he was first introduced to cultism when he was in senior high school.

Watch : Hot Lady Piss Over Herself During A Dirty Wrestle Fight With Her Boyfriend Side Chick – Video

He revealed that he was a footballer and had sought help from a medicine man (mallam) which failed. It was after the failure that he was introduced to occultism (saint as he called it).

He and three others went to sleep at a cemetery and it helped him score three goals during his school’s matches at the inter-schools competition.

That encounter led him to deepen his belief in the practice and he and the three others become go-to persons for spiritual help.

Continuing his story, the 25-year-old stated that they were once consulted by a galamsey (illegal mining) group for spiritual backing.

The spirit they called ended up demanding a seven-year-old girl as a sacrifice. He and his cult members travelled to a nearby village, got a little girl, and used her as directed.

But after some time, some of the things he did have been haunting him and making him behave in a manner which has been deemed as madness.

It was in the pursuit of a solution to his ‘madness’ that his parents brought him to the Wiase Mu Nsem show on Nhyira FM.

While he told his story, his mother and father sat down in a shocked mood.