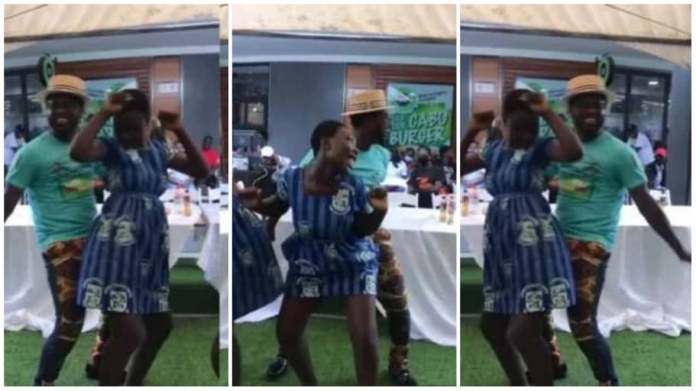 Abeiku Santana Took Good Care Of Shs Girl Who Tw3rk For Him – Video. Popular Ghanaian radio presenter, Abeiku Sanatana, has been caught on camera having a bad dance with SHS girls in uniform.

Okay FM presenter, Abeiku Sanatana, is in very hot mess as he has been captured in video dancing a little too close to some high school girls.

Reports have it that, Friday, November 27, 2020, being Black Friday, Okay FM decided to move their studios out to the Achimota Retail Centre, in order to interact physically with their listeners.

The female students were in their school uniform and believed to be with the St. John’s Grammar School, were dancing on the floor when Abeiku moved forward to the backside of one of the students.

Abeiku Santana is seen overly excited as the twerking of some SHS girls, so much that he’s seen trying to catch some fun by positioning himself for a lap dance moment.

Judging from the video, Abeiku seems to have lost all sense of judgement and just jumped right in to have some fun which has put him on the public chopping board of morality.