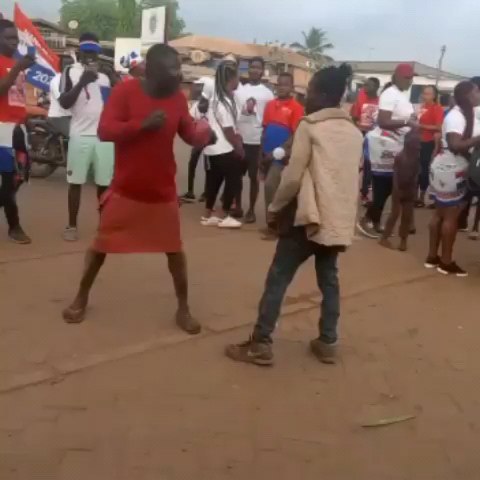 2 Madmen Wrestle N Exchange Slaps @ NPP peace walk – Video Will Make Ur Day. Two Madmen got into a severe fight during NPP’s health/Peace walk at Nkwanta in the Oti Region.

In a video, the two madmen can be seen facing each other squarely, trading blows as people watch in dismay.

They were quickly separated when things got a little intense between them.It’s unsure what exactly sparked the violent act between the two men.

According to an eyewitness identified as Delight Asiesu, nothing really happened prior to the fight.

“we were gathered at the meeting point of our scheduled Health walk, including the two madmen, standing beside each other, one suddenly face the other with a blow, the other also accepted the challenge and that was where the fight was initiated”

The health walk, led by the parliamentary candidate for Nkwanta North Constituency, Sherifa Tijani, is however meant to preach peace to the people of Oti Region ahead of the upcoming General election.