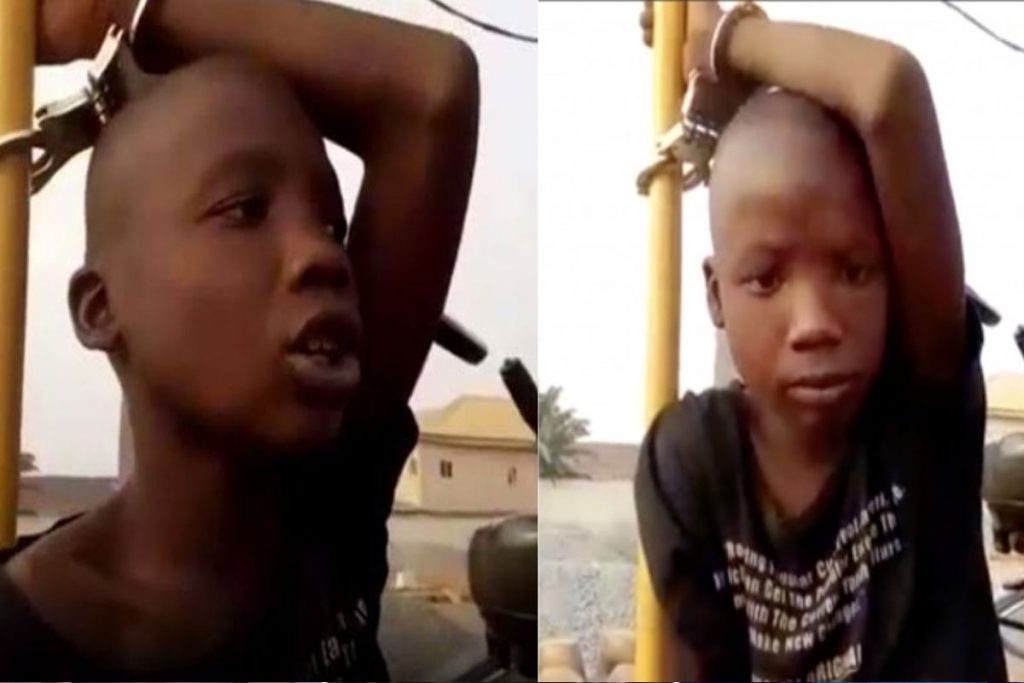 10-year-old Armed Robber Busted By Security Operatives, Confess Dat He Killed 2 people (Video Below)/ A 10-year-old armed robber, identified as Monday Omoruye, has been arrested by security operatives for his involvement in crime activities in Edo State.

In a video that has now gone viral, Omoruye confessed that he was introduced to robbery by his brother and that he had carried out four robbery operations so far.

When asked where he got his weapons from, he said during the 2020 #EndSARS protests, he alongside his brother and some of their friends broke into Oba market police station and stole arms from the station.

Speaking further, Omoruye said his brother taught him how to shoot a pistol and so far he had killed two people during the course of robbery.

He said, “My name is Monday Omoruye. My father, Odiom, stays at Aro Junction. My mummy stays elsewhere while I stay at Ringroad.
“I am here because of the phone matter. One of my friends, someone came to buy a chain from him, N10, 000, he gave him N8, 000. We said we should go and get the N2, 000, we held him that he won’t go unless he pays the complete money.

“There’s one guy, I don’t know if he was drunk, he gave us a phone, we returned it. He told the other guy he wants to sleep, we told him not to allow him sleep because that one will steal everything, money and phone, the guy didn’t listen. When it was daybreak, I said don’t give him your phone but he didn’t listen, the other guy told him he wanted to download lots of music but ran away so we were looking for him, the owner of the phone said if he doesn’t see him, he will hold me, that was why he held me, called vigilante for me.

“My brother has two police guns that he collected from the police station at Urban market during #EndSARS protest.

“I can operate a small pistol, my brother taught me and he keeps them all. I have followed them to four robbery operations in Sapele, Siluko Road, Sakpoba. We have killed 2 people, one at Siluko Road, the other at Igan Market. I don’t know the names of those people we killed. When we finish robbing, we go to the cartel.

“If you want to see my brother, go in the morning and around 8pm, you will see him.”